PIERRE, SD – A new bill that would close both Interstate-29 and Interstate-90 in South Dakota for 10 months a year was introduced in the state senate today. The purpose of the bill, according to sponsors, is to save the state money and enhance the economic development of those communities that the building of the interstates passed by in the 1960s and 70s.

“It’s a pure common sense bottom-line focused piece of legislation,” said Sen. Ardim “Dim” Bowknot, R-Canton. “Do you know how much snow removal and repair of interstate damage due to flooding cost this state each year? Yeah, me neither. But I’ll bet it’s a bunch. Besides, it’ll give Canton a shot in the arm, financially. Maybe it’ll finally be known as something more than that town on the way to Rock Valley and Doon, Iowa.”

To be sure, the money spent on maintenance on the state’s two interstates is significant. And perhaps closing the interstates for 80 percent of the year could realize some cost savings. But just how much isn’t clear. Sen. Bernie Otter, R-Tea and chairperson of the Senate Transportation Committee said he had mixed feelings about the Interstate Closing Bill as it’s become known. Being employed in contractor sales during the legislature off-season, Otter, said he was a bit concerned about how the bill would affect his and his fellow business people who depend on contractors for business.

“Shoot,” the Tea legislator exclaimed, “I’m afraid my contractor buddies won’t be able to be hired to fix potholes, repair expansion joints, and fix bridges much of the time here in South Dakota.” But when the reporter reminded him that most of the road maintenance contracts went to out-of-state businesses in North Dakota, Iowa, Nebraska, and Kansas, Otter said, “Oh yeah, that’s right. Well, never mind then.”

Otter was excited that the rerouting of traffic to secondary roads paralleling the interstate system might end up being a financial boon to communities like his hometown of Tea. “Golly sakes! Folks could swing through and see our water tower that says, ‘Bring Your Sugar To Tea’ or visit that adult video and lingerie store.’” 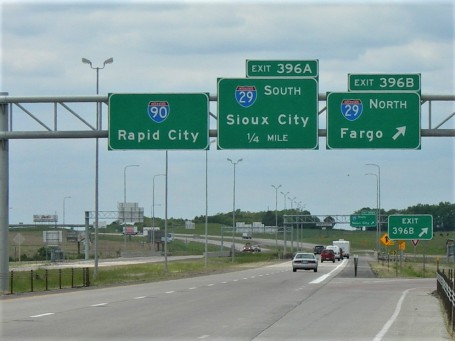 Interstates 29 and 90 cross each other just north of Sioux Falls. State Sen. Dim Bowknot thinks his bill closing them 10 months of the year will save the state big bucks and help rejuvenate towns missed by the state’s Interstate systems.

Bowknot said his pre-submission research learned that lots of towns were “pumped” about having the two interstates closed. “On I-29 there’s North Sioux City, Jefferson, Vermillion, Beresford, Canton, of course, Worthing, Harrisburg, Baltic, Dell Rapids, Flandreau, Madison, and so on. I-90 has Brandon, Corson, Hartford, Humboldt, Salem, Pukwana, Presho, Chamberlain, Kennebec, Vivian, maybe Phillip, Scenic, Tilford, and the rest of those West River towns. It’s kinda overwhelming. Like going back to the 1960s or ’50s. Just like some of the other bills that have been introduced would do!”

This reporter attempted to contact Governor Krispie Gnome for her reaction to Bowknot’s bill, but she wasn’t taking any calls. The governor apparently was in the middle of a living immersion with domesticated large, even-toed ungulates, aka hogs. An aide who is a cousin of the chief executive said she was preparing for a push to expand concentrated animal feeding operations (CAFOs) in the Rushmore State.

All questions about the bill were referred to Lt. Gov. Rowdy Roadmap, R-Union Center. When asked about the Interstate Closing Bill, Roadmap smiled, then squinting his eyes, said, “Huh?”

The bill goes first to the transportation committee for discussion and an up or down vote. Providing it survives those yahoos, the bill goes on to the full Senate for consideration and dumping on the House of Representatives for more work.